We're getting another big snow here in Hopwoodland, so we're busying ourselves with baking healthy snacks.

Today: BAKED APPLES!  There's lots of ways to make yummy baked apples, so be creative! Here's how we made ours. 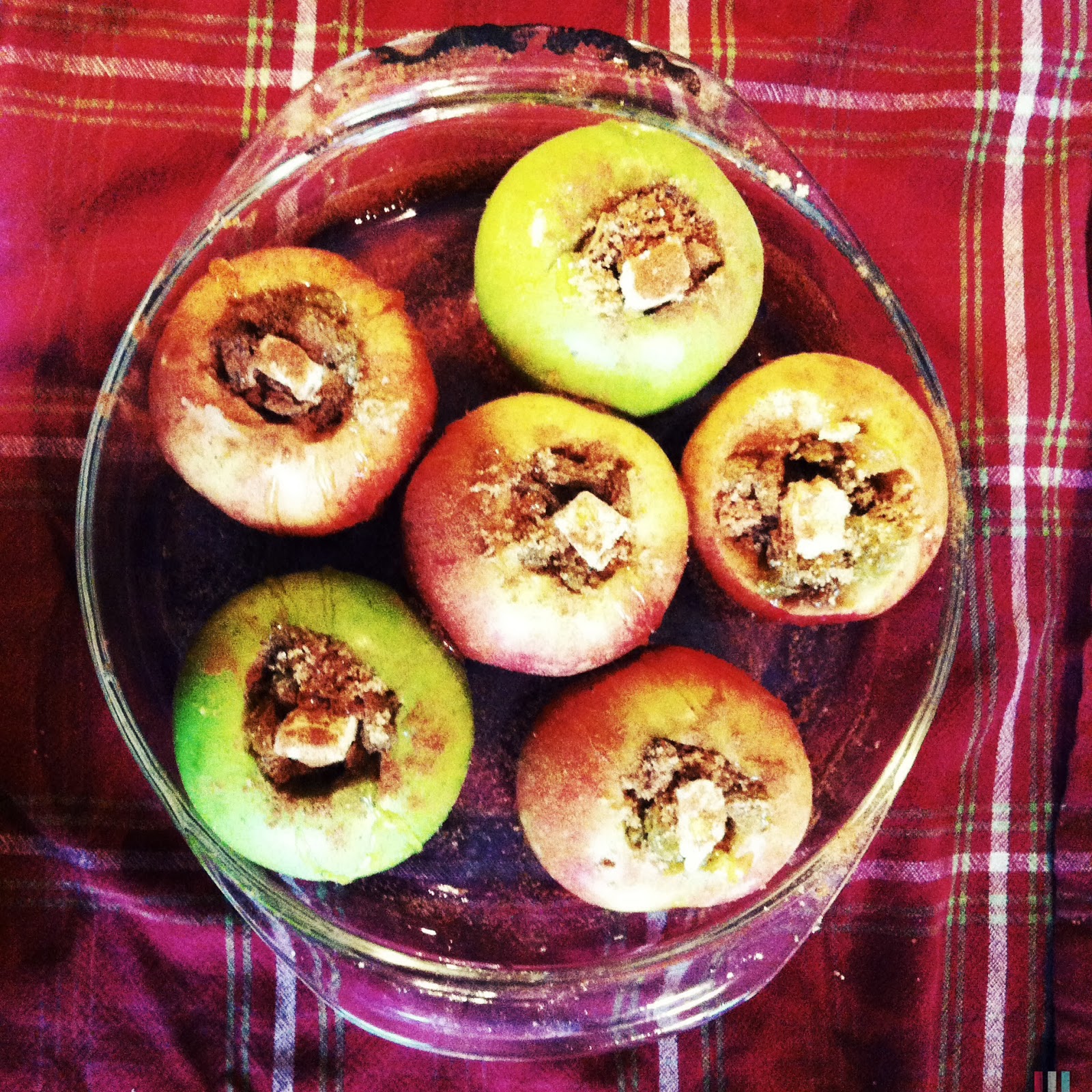 Preheat the oven to 350 degrees.
Place the cored apples in a baking dish.
Mix the sugar, raisins, spices and salt in a bowl. Stuff the apples with the raisin mixture. Place a dot of butter on top of the apples. Pour a little bit of apple juice into the bottom of the baking dish. Cover with aluminum foil. Bake for about 50 minutes until the apples can be easily poked with a fork. Drizzle with a little bit of honey and enjoy! 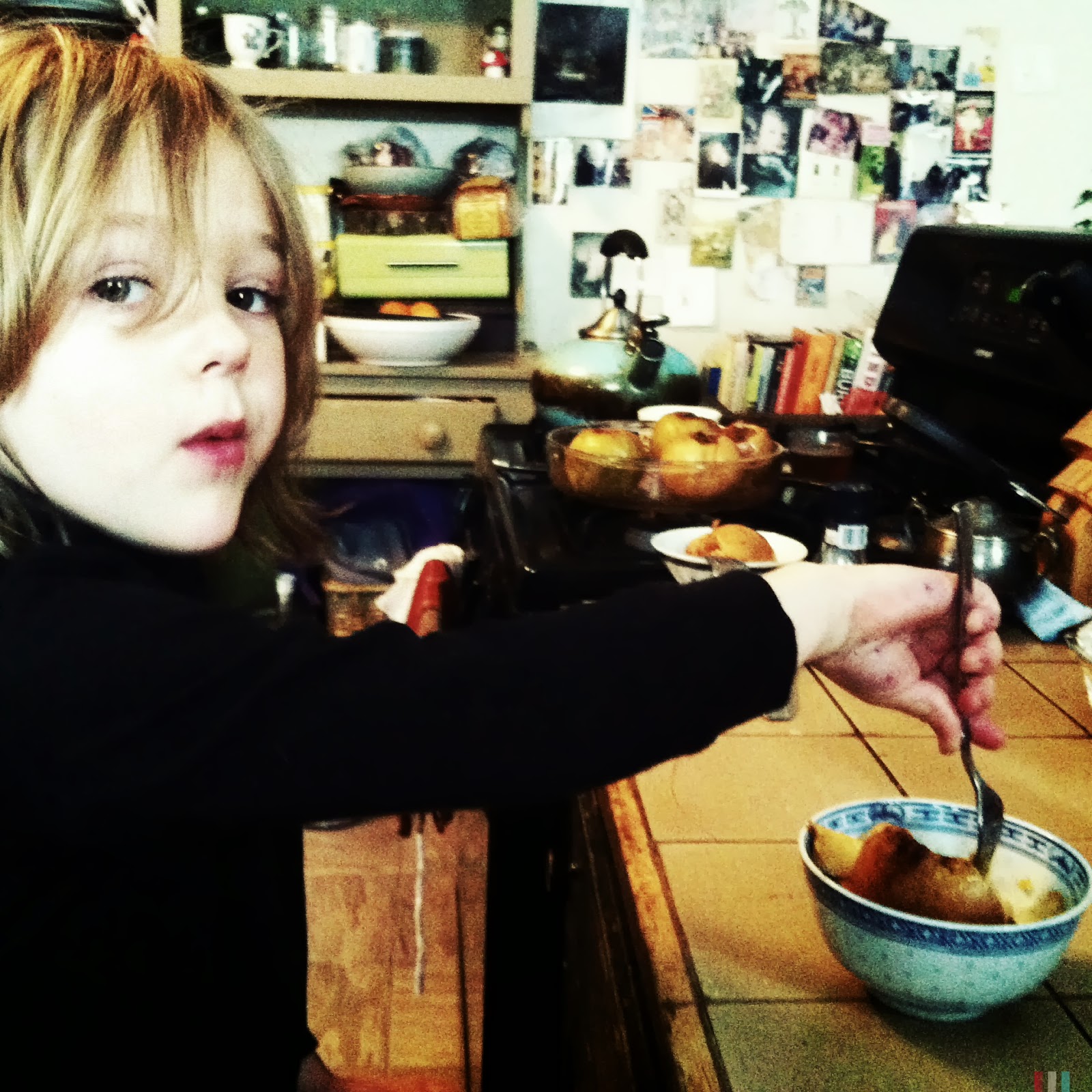 Eat in good health! And tell us about your own healthy comfort food ideas.

Getting Creative With Healthy Treats!

Rowan and I have been getting creative with healthy eating recently. When we held a snowman competition on Facebook last month, we were inspired, so we set out to make fun, healthy, yummy snowmen snacks. And here's what we ended up with! 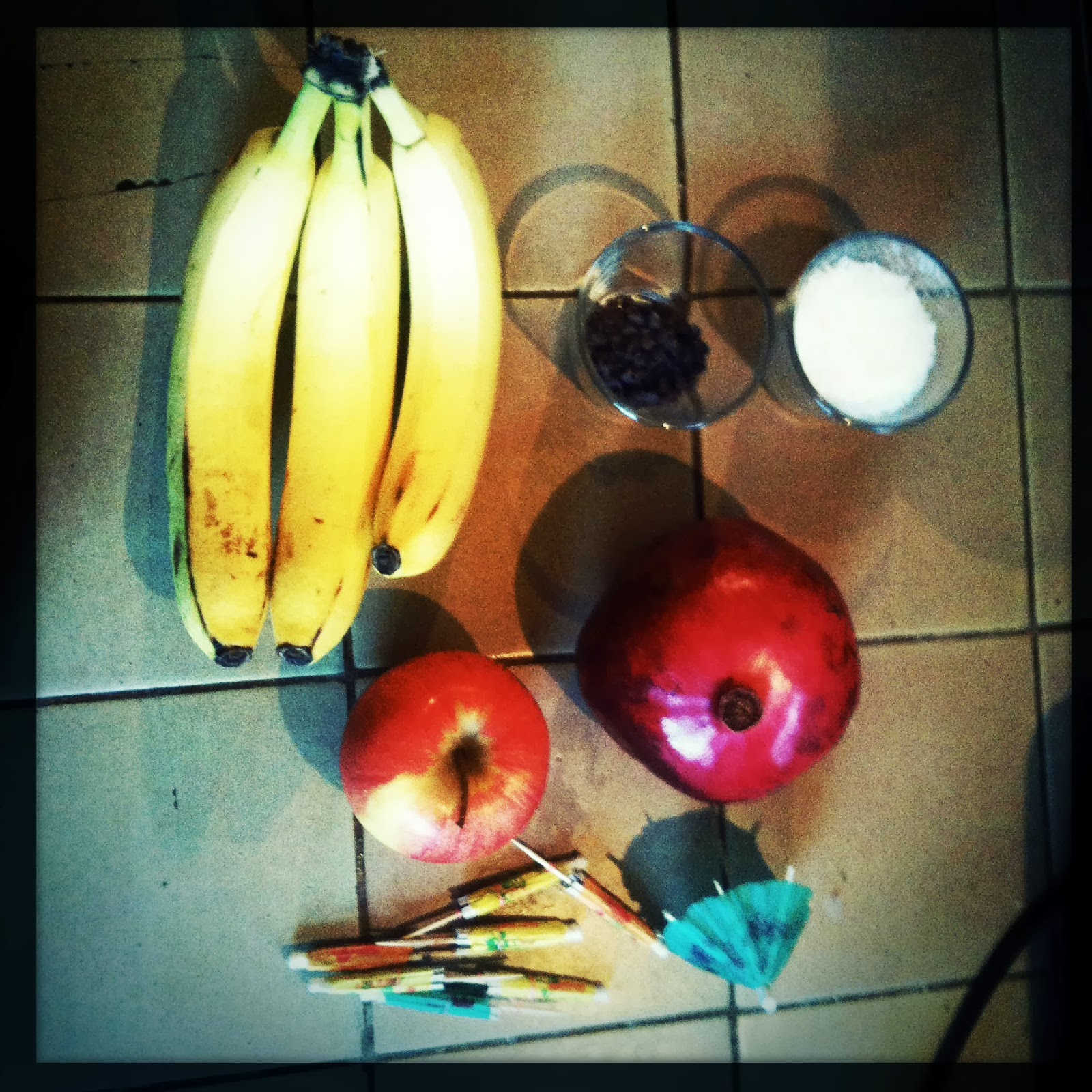 We rolled banana slices in unsweetened coconut flakes. Then we poked mini chocolate chips in for the eyes and mouth. Pomegranate seeds worked well for buttons and we used apple peels for the arms. Then we held them all together with a toothpick. The only ones we had were ones with little umbrellas on top, but I think they look pretty cute. And there you have it! An army of little banana snowmen! Try this at home and gobble as many up as you'd like! 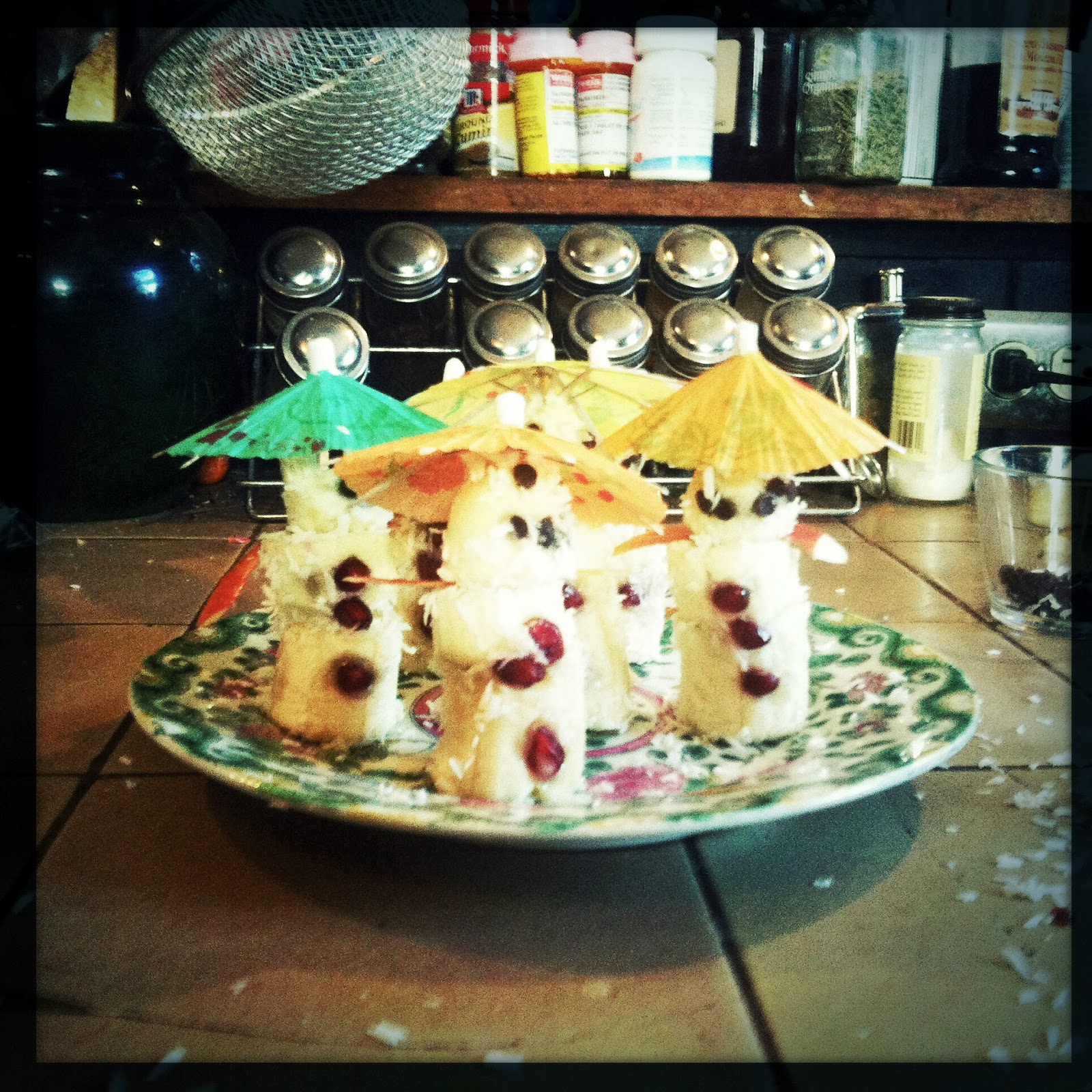 We'd love to hear about your favorite healthy snacks. Post pictures of your kids eating a healthy yummy snack as comments to this blog or onto the Lolly & YoYo Facebook page. At the end of the weekend, we'll pick a winner. And this time, the winner will get a gift certificate for two free brunches at one of our favorite healthy restaurants, the Lovin' Oven in Frenchtown New Jersey! Yummy!

Email ThisBlogThis!Share to TwitterShare to FacebookShare to Pinterest
Labels: Getting creative with healthy kids snacks! COMPETITION ALERT: Share your favorite healthy snack with us and win a brunch for two at the Lovin Oven in Frenchtown, NJ

Rowan and I spent the morning making origami balloons. It's a pretty intricate craft, so she helped me with some of the folding, creasing, and, finally, blowing them up. It's a pretty hands-on craft for a grown-up, but now we have lots of pretty balloons that we can play with, decorate with, or use as packing material in special packages.

Here's how we made them. We used craft paper that we had lying around, but you can use old wrapping paper, magazine pages, or newspaper. Or paint & color your own paper!

1. Start with a square piece of paper. 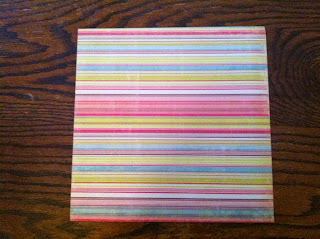 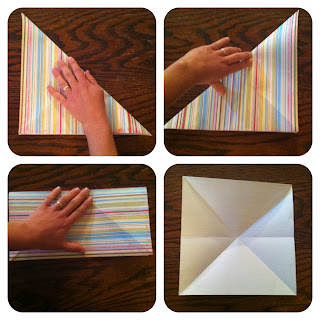 6. Fold the paper into the rectangle again.
7. Using the creases as a guide, fold left flap over so the paper becomes a triangle.
8. Repeat with the right side. (When you do it to the right side, too, you'll end up with a triangularly folded piece of paper that could stand on its own like a pyramid.)
9. Once you've got it, put your triangle down and get ready for the next step. 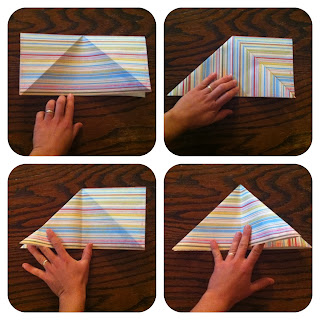 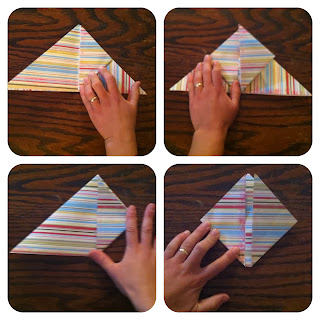 12. You should have before you a little diamond shaped piece of folded paper in front of you. It should look identical on both sides. Fold the outer flaps of the diamond in towards the middle of the diamond.
13. Repeat on the other side. 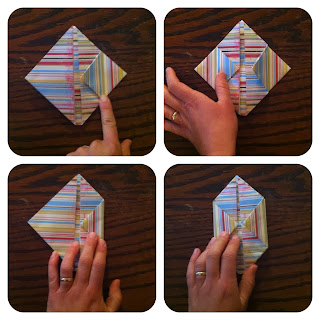 14. You've made little pockets in  your diamond! Fold each of the top edges into the pockets.
15. Repeat on the other side. 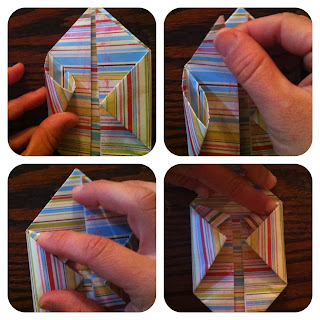 16. Your folded up balloon should have a little opening at the very bottom. Blow into it and Voila! You've got yourself a cute little balloon.


It really does get easier the more you make these. It's kind of addictive. Once you have all of the balloons you want, you can play catch, soccer, have an indoor 'snowball' fight, or play a little sorting game like Rowan is doing in this little video. We made balloons out of 5 different patterns, so she sorted them out in different ways. The older the kid, the more challenging you can make the game. Can they balance it on their head or their hand as they bring it to it's basket? Can they throw it into the basket from across the room? Can they do it with their eyes closed? And, best of all, you can string them up after you're all done playing with them and use them as a garland in the kids room!

Email ThisBlogThis!Share to TwitterShare to FacebookShare to Pinterest
Labels: Lolly and Rowan crafted some paper balloons today. Here's the craft and some games that you can play with them! 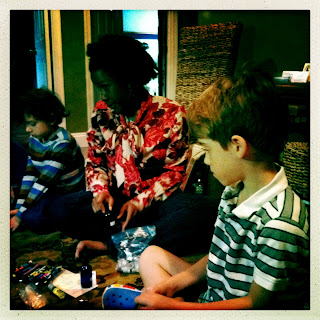 A few weeks ago, I got an email from someone who is a good friend and a great massage therapist/acupressurist/aromatherapist. Her name is Sara Naomi and she's the owner of Therapeutic Calm, one of the practices that operates through the Rooted River Therapies consortium in Yardley.  It turned out that she was conducting her first aromatherapy class for kids! I was very excited to bring Rowan. She is already interested in 'good smells'. Lavender essential oils helped us all through some particularly rough sleeping patches, so she already had a bit of experience in her 4 1/2 years with the benefits of aromatherapy.


We arrived at the class a little late. Am I the only mother who can never get anyplace on time? Anyhow, when we walked in, Sara was surrounded by kids ranging in age from 5-8 who couldn't take their eyes off of her. She was speaking to them in her gentle voice and showing them pictures of functioning and non-functioning cells. She taught them about olfactory nerves. She gave them tips on using scents to aid in studying and learning. She taught them about using oils to help with headaches and sore muscles. It was great. The kids and parents loved it. 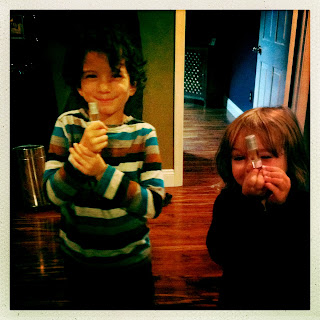 At the end of the class, each of the kids got to mix their own oil to take home. And Sara had made a delicious (and super healthy) coconut bar for a snack! It even had essential oils in it.

This is the first time that I took Rowan to a class like this. It's actually the first time I've even heard of a class like this for children. I'm looking forward to attending more. It's nice to set a tone for holistic living at such a young age. And it was pretty great for her to be able to bring home a craft that wasn't made out of paper, straws & pipe cleaners. Nothing against paper, straws & pipe cleaner, but lavender-clove oil is a pretty nifty alternative.

For more on Therepeutic Calm and all of the other cool things that Sara Naomi does, here's some links:

therapeuticcalm.net
stresslesstresses.com
You can also follow her under 'therapeutic calm' on facebook, instagram, etsy and pinterest. Or if you're interested in setting up a class with her, email her at therapeuticcalm@gmail.com. It's a great way for kids to learn something new either as part of a home school program or as a fun after school thing to do.


Go say hi to her at the Rooted River Therapies booth at the Yardley Harvest Festival this weekend. She may even have some treats for you. 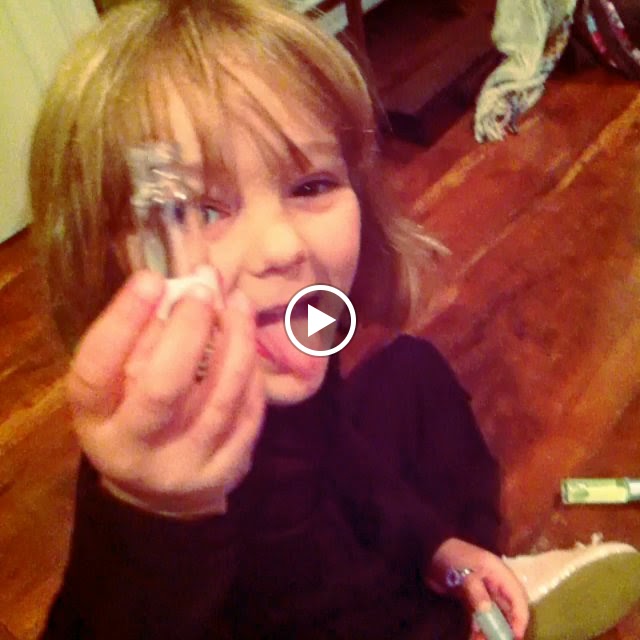 Here are clips from the final two library shows of the tour! We played my home town library, Riegelsville, a great little library at the tipity top of Bucks County. A perfect crowd came out and we had a great time. We were even able to bring the parachute out for a song.
For some reason, this video clip didn't come through:( But stay posted for pictures! We had some friends taking them while we were playing.

This is our very last show at the tiniest library we've ever been to. Yay Pipersville!
We had such a great time over the past two weeks. Thank you to everyone who came to the shows. And we'll see you at all of our shows coming up!

I can hardly believe that the tour is almost done! We lost our video from the Morrisville show. Booo! But we've got three cute videos from our other shows this week. Here they are!


We started with a small group in Fallsington, so we got to play one of our more intricate balancing and sorting games with noodles and baskets. Now if I can just use this technique to clean my house...
Our Southampton show was in the midst of a crazy rain storm, but that didn't dampen our spirits.
Northampton library was the first place that we ever played a kids show together! My, how things have changed since then. Anyhow, we visited a rainforest at this show since it was raining outside. YoYo is catching raindrops with the kids in this clip.

As we embark on our second week of the Bucks County Library Tour, we just wanted to share some quick shots from Saturday's shows!
Here we are at Wrightstown Library. There are some shots here of our 'moon rock hockey' game that we've been playing. The kids are learning about how to use equipment while YoYo is learning a little bit about outerspace!

And here we are at the Glenside Library for their Summer Reading Wrap Party. It's not in Bucks County, but I wanted to share this clip along with the other videos we've been taking. What a great library! They have a vegetable garden outside. And there were all sorts of cool crafts and projects for the kids to do at this event. Fun! This video is showing a little bit of our 'rainbow fishing' game where the kids throw tie-died socks through a hula hoop.